In its recently released Mid-Year Update to The McClean Report 2018, IC Insights forecasts that the 2018-2022 global GDP and IC market correlation coefficient will reach 0.95, up from 0.88 in the 2010-2017 time period.  IC Insights depicts the increasingly close correlation between worldwide GDP growth and IC market growth through 2017, as well as its forecast through 2022, in Figure 1.

IC Insights believes that the increasing number of mergers and acquisitions, leading to fewer major IC manufacturers and suppliers, is one of the major changes in the supply base that illustrate the maturing of the industry that is helping foster a closer correlation between worldwide GDP growth and IC market growth. Other factors include the strong movement to the fab-lite business model and a declining CAPEX as a percent of sales ratio, all trends that are indicative of dramatic changes to the semiconductor industry that are likely to lead to less volatile market cycles over the long term.

In 2017, IC industry growth was greatly influenced by the “Capacity/Capital Spending Cycle Model” as the DRAM and NAND flash markets surged and served to drive total IC industry growth of 25%.  It would initially appear that the strong correlation coefficient between worldwide GDP growth and total IC market growth that had been evident from 2010 through 2016 had disappeared in 2017.  However, IC Insights does not believe that is the case.

When excluding the DRAM and NAND flash segments from the IC market in 2017, the remainder of the IC market displayed an 11% increase, which closely correlates to what would be expected given a worldwide GDP increase from 2.4% in 2016 to 3.1% in 2017.  Moreover, the three-point decline in the total IC market growth rate forecast for 2018, when excluding DRAM and NAND flash (from 11% in 2017 to 8% in 2018), is expected to mirror the slight decline expected for worldwide GDP growth this year as compared to last year.  Thus, excluding the amazing surge for the DRAM and NAND flash markets in 2017 and 2018, IC Insights believes that the trend toward an increasingly close correlation between total IC market growth and worldwide GDP growth is still largely intact. 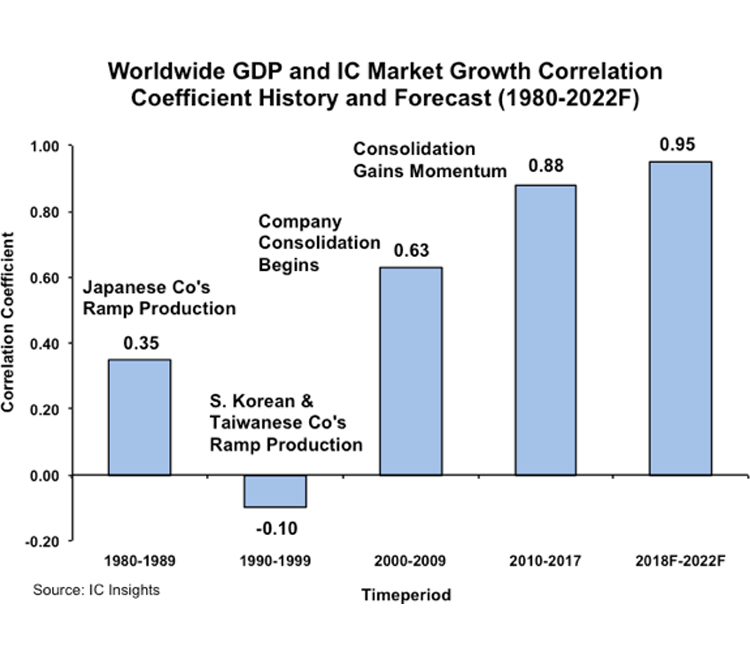