On November 15, "Optics Express" published a technical document of AUO.

According to the literature, AU Optronics has proposed a novel optical design that can increase the optical efficiency of Micro LED (μLED) automotive displays by about 2.7 times and increase the peak brightness by more than 3 times.

The industry is very optimistic about the market prospects of LED display technology. Once it has high peak brightness, true dark state and excellent reliability, it will become a destructive display technology that can seize large-size TVs, car monitors, etc. Markets such as augmented reality (AR) and virtual reality (VR), as well as smart watches.

However, AU Optronics believes that to seize the above-mentioned market, the light efficiency of μLED needs to be further improved, but so far, most of the LED technology development work has been concentrated on the chip itself and the manufacturing process.

For example, develop passivation methods or new manufacturing methods to minimize the sidewall defects of μLED chips to improve quantum efficiency; or reduce the production cost of μLEDs through mass transfer technology. AU Optronics believes that with the continuous advancement of LED display technology, related optical design is also crucial. According to the literature, in the traditional LED vehicle display, the light extraction efficiency and angle distribution are affected by the absorption, refraction and reflection process of each layer, and the optical efficiency reaching the inside of the eye frame is only about 3%. With a new optical design, AUO has increased the total optical efficiency of the vehicle display system by 2.7 times (9.98% ÷ 3.69%).

Moreover, this optical design also improves the environmental contrast, which can provide clearer images under 10,000 lux of environmental illumination. 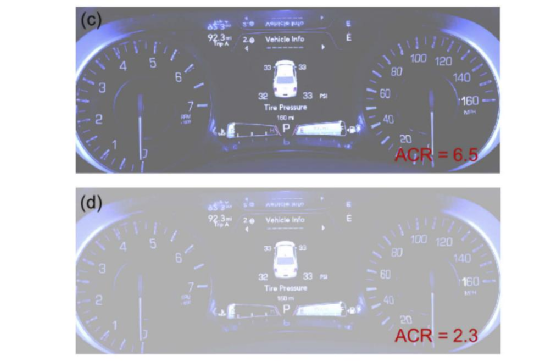 In addition to panel factories, Micro LED also needs to coordinate development from many links such as chips, packaging, materials and equipment to achieve new technological breakthroughs in order to win the favor of large-size TVs, car monitors, AR&VR, smart wear and other broad markets.

Related Blog
How to Judge the Quality of LCD Display Screen? How to Avoid Dark Spots when Buying an LCD Display? How Can TFT LCD Screen Be Visible in Sunlight?
Related Products
Resources
Products