As organic light-emitting diode (OLED) displays are used in more smartphones and high-end flat-panel TVs, panel makers have boosted their investments in new OLED display fab construction. As a result, the global production capacity of AMOLED panels — including both red-green-blue (RGB) OLED and white OLED (WOLED) — is forecast to surge 320 percent from 11.9 million square meters in 2017 to 50.1 million square meters in 2022, according to new analysis from IHS Markit (Nasdaq: INFO).

The two market leaders — Samsung Display and LG Display — have taken different paths: Samsung is focusing on RGB OLED panels for mobile devices, and LG on WOLED displays for TVs. To cope with the trend of RGB OLED replacing the liquid crystal display (LCD) in smartphones and other mobile devices, especially for the full-screen and flexible feature of OLED panels, LG Display has started to manufacture RGB OLED panels in 2017. Meanwhile, Chinese panel makers, including BOE, ChinaStar, Tianma, Visionox, EverDisplay, Truly, and Royole, are all expanding the production capacity of RGB OLED panels, targeting the mobile market. 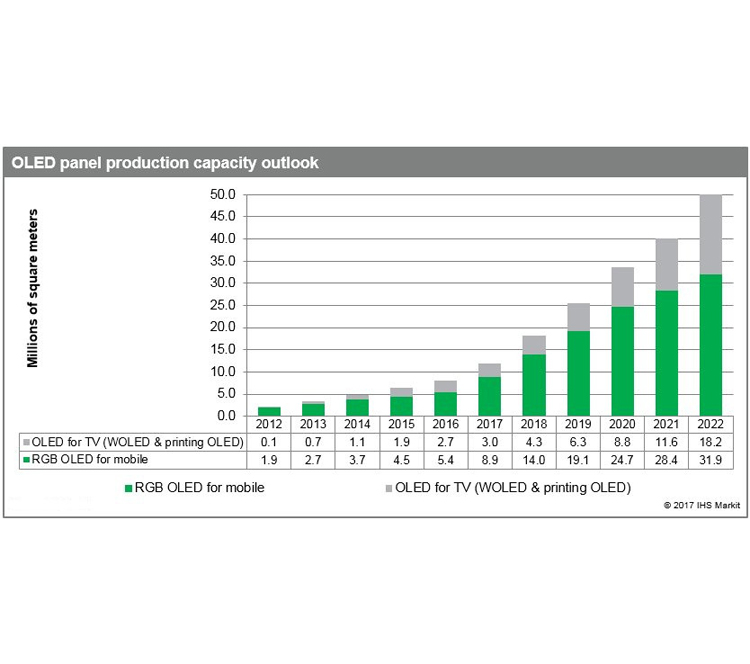 “It takes more than $11.5 billion to build a Gen 6 flexible OLED factory with a capacity of 90,000 substrate sheets per month, and this is a much larger investment required than building a Gen 10.5 TFT LCD fab with the same capacity,” said David Hsieh, senior director at IHS Markit. “The learning curve costs for the mass production of flexible OLED panels are also high. The financial and technological risks associated with the AMOLED panels have hampered Japanese and Taiwanese makers from entering the market aggressively,” Hsieh said. “In other words, the capacity expansion of AMOLED display, whether it is RGB OLED or WOLED, is only apparent in China and South Korea.”

Samsung Display will remain the dominant supplier of the RGB OLED panels for smartphones. Its RGB OLED panel capacity will grow from 7.7 million square meters in 2017 to 16.6 million square meters in 2022, IHS Markit says. Even though many Chinese panel makers are building RGB OLED fabs, each of their production capacity is much smaller than that of Samsung Display. Due to the gap in their production capacities, they will target different customers: Samsung Display will mainly focus on two major customers — Samsung Electronics (the Galaxy) and Apple (the iPhone), while Chinese makers will be targeting Chinese smartphone makers at a smaller scale. These include Huawei, Xiaomi, Vivo, Oppo, Meizu, Lenovo, and ZTE, and white box makers.

South Korea’s panel makers are estimated to account for 93 percent of the global AMOLED production capacity in 2017, and their share is expected to drop to 71 percent in 2022. Chinese players (BOE, ChinaStar, Tianma, Visionox, EverDisplay, and Royole) will account for 26 percent in 2022 from 5 percent in 2017.

“Many interpret the strong expansion of RGB OLED capacity in China as a threat to South Korean makers. It is indeed a threat. However, while South Korean companies have high capacity fabs with high efficiencies, China’s OLED fabs are relatively small and dispersed across multiple regions and companies,” Hsieh said. “Also, while the Chinese makers could expand fabs with government subsidies, the operating performance will completely depend on the panel makers themselves. How long it will take until they could sustain the business, getting over the challenges with learning curve costs, initial low yield rates, and capacity utilization, is still an open question.”